Delayed transfers of care: a target that misses the mark?
by CLCA

Reducing delayed transfers of care continues to be a priority for the NHS and social care. But since March 2017, the already significant national focus on delayed transfers has increased substantially, as national bodies attempted to arrest the spiralling growth in these delays.

First, a quick recap. The Spring Budget 2017 provided an extra £2 billion to support adult social care – in part to help tackle steeply rising rates of delayed transfers, but also to support the local social care provider market and meet increasing adult social care needs. Then the Department of Health mandate to NHS England for 2017/18 set an explicit target to reduce delayed transfers to the level where they occupied no more than 3.5 per cent of available NHS bed days1 by September 2017. It was hoped that this would allow the NHS to free up 2,000–3,000 acute hospital beds and improve hospital waiting times. But focusing narrowly on delayed transfers of care led to a damaging row between local authorities and NHS England as it quickly became apparent the target would not be met.

No one would argue with the desire to see fewer and shorter delays in discharging patients from hospital. But to achieve the target would have required the equivalent of cancelling out three years of growth in delayed transfers in five months when health and social care services were under unprecedented pressure. This was never likely to happen. 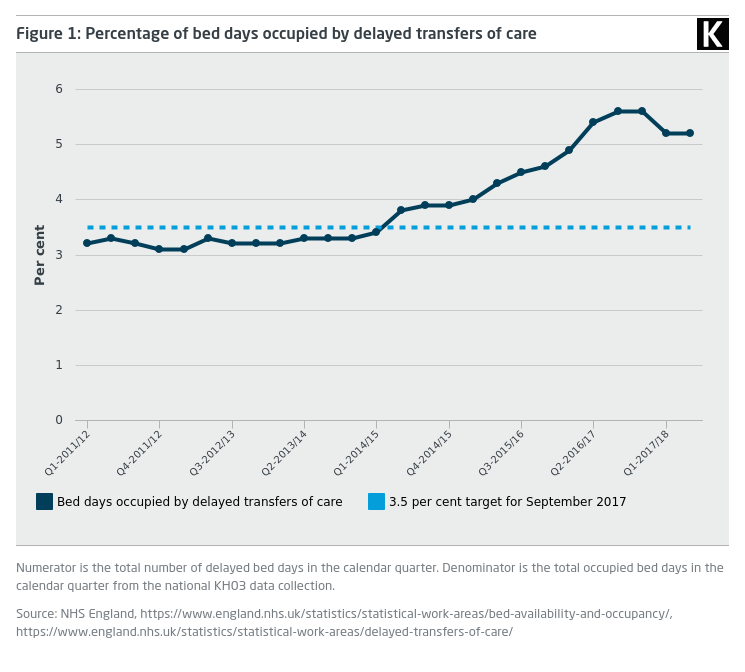 Now that the dust has settled, what progress has been made? Figure 1 shows that the target was missed by a wide margin, with the proportion of occupied bed days due to delayed transfers remaining above 5 per cent rather than falling to 3.5 per cent. But looking at the data for individual months shows the progress the health and care system has made in reducing delayed transfers this year. The total number of delayed transfers in September 2017 is down 14.4 per cent compared to September last year. Over the past four months average daily delayed transfers have dropped below last year’s levels (Figure 2), moderating the spiralling growth we have seen since 2015. 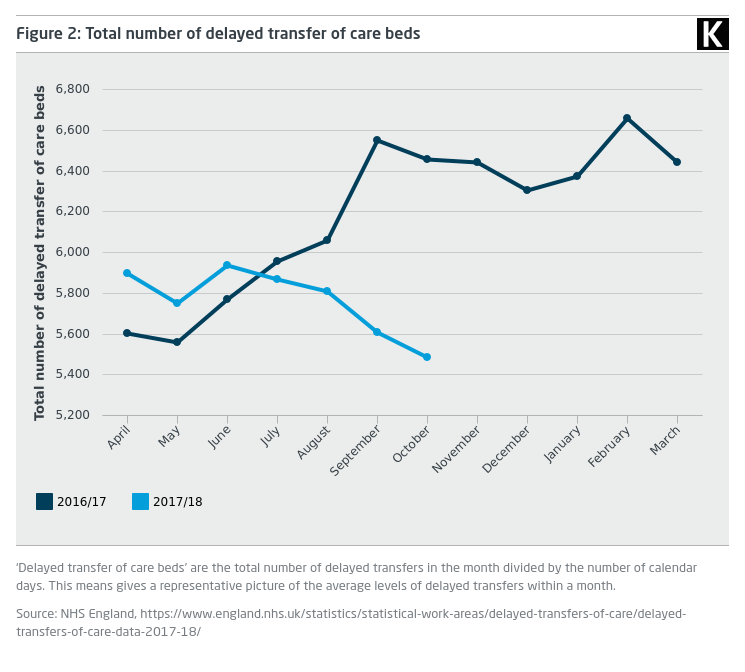 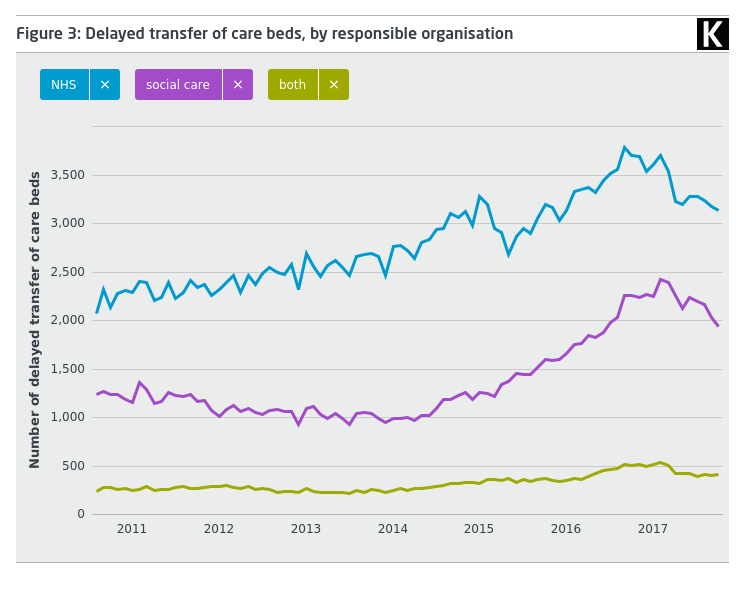 So what lessons can we learn from this? First, targets should focus on the right issues. A recent Care Quality Commission report into health and care systems notes: ‘Focusing on [delayed transfers] in isolation will not resolve the problems that local systems are facing.’ Placing a disproportionate focus on short-term reductions in delayed transfers, can distort the priorities of both health and care organisations that must also address wider and more strategic capacity pressures in the health and social care system. Second, targets should be achievable. The proposed reduction in delayed transfers of care was never likely to be attained and led to divisive recriminations across health and care organisations (both nationally and locally), precisely at a time when health and care services are attempting to collaborate more in partnership. Although the September 2017 target was missed, reversing the rapid recent growth in delayed transfers should be more lauded as the significant achievement it was.

CLCA is marketed as a company that can potentially reduce hospital stays, eliminate hospital admissions and support relatives. Cntact us today for staffing requirements or care provision.